Not many universities have a staff dedicated to American Indian students, but UCR does. UCR respects all identities, cultures, and backgrounds, and provides the people and resources to help you succeed. We are here for you, and welcome you as part of our UCR family. Stop by 229 Costo Hall to say hi.

Email: joshuag@ucr.edu
Josh earned a B.S. in Business Administration from UCR in 2004, and an M.B.A. from the University of Phoenix in 2007. He began working at UCR in 2005 as a program assistant, and started his duties as director of Native American Student Programs in 2009. He is also the current chair and member of the University of California American Indian Counselor Recruiter Association. Josh enjoys cultural ceremonies and gatherings, running, sports, and learning from others. He is particularly interested in learning more about his Native language. He lives in Riverside with his wife, son, daughter, and 2 Australian dogs.

Email: brendab@ucr.edu
Brenda started working at UCR in January 1999. She is the administrative assistant for NASP and for Asian Pacific Student Programs, and is also a volunteer for the UCR Staff Assembly. She is mother of two wonderful young men and various furry creatures. In her spare time she enjoys golf, cooking, and reading.

Rachell Enriquez has worked in multiple departments over her years on campus. Her passion for seeing student’s success began as an undergraduate. Her fondest memories as an undergraduate were volunteering for the Ethnic & Gender Cultural Centers, Native American Student Programs, and Chicano Student Programs. These cultural centers provided her with resources and tools needed to embrace herself, her values, and inspired her to continue practicing native ways and learn more about her Tohono O’odham heritage. She dreamt of someday being given the opportunity to work for a campus cultural program where she could pay it forward. Rachell’s commitment of dedication to student’s success was earned. Rachell recently joined Native American Student Programs as Program Coordinator. When not working, Rachell enjoys attending cultural events, spending time with her family, raising a college student, reading, singing, dancing, cooking, and definitely eating.

Preferred pronouns: He/Him
Joaquin F. Tarango (Miwok/Mexican) graduated cum laude from the California State University, Sacramento in 2015 with a Bachelor’s degree in Psychology, and hopes one day to continue his education in the field of behavioral neuroscience. Until then, his passion will always remain in helping Native American communities, especially students striving for higher education. Joaquin’s cultural heritage as a traditional Miwok dancer, love for helping people, and dedication to education are engrained at his core foundation. He has worked as a Residential Assistant (RA and Senior Head RA) from 2012 – 2017 with the American Indian Summer Institute of Earth System Sciences through UC, Irvine; a summer program aimed at educating and inspiring Native American high school students from throughout the nation to pursue higher education. Joaquin has volunteered (and been “voluntold”) with various Native American organizations throughout his life, and has worked directly for his tribe, Wilton Rancheria, in multiple capacities as a tutor, certified Tribal Monitor, Election Commission Spokesperson, and weekly Elder Food Distribution volunteer. He is honored and excited for the new opportunities, challenges, and adventures that await here at UC Riverside! 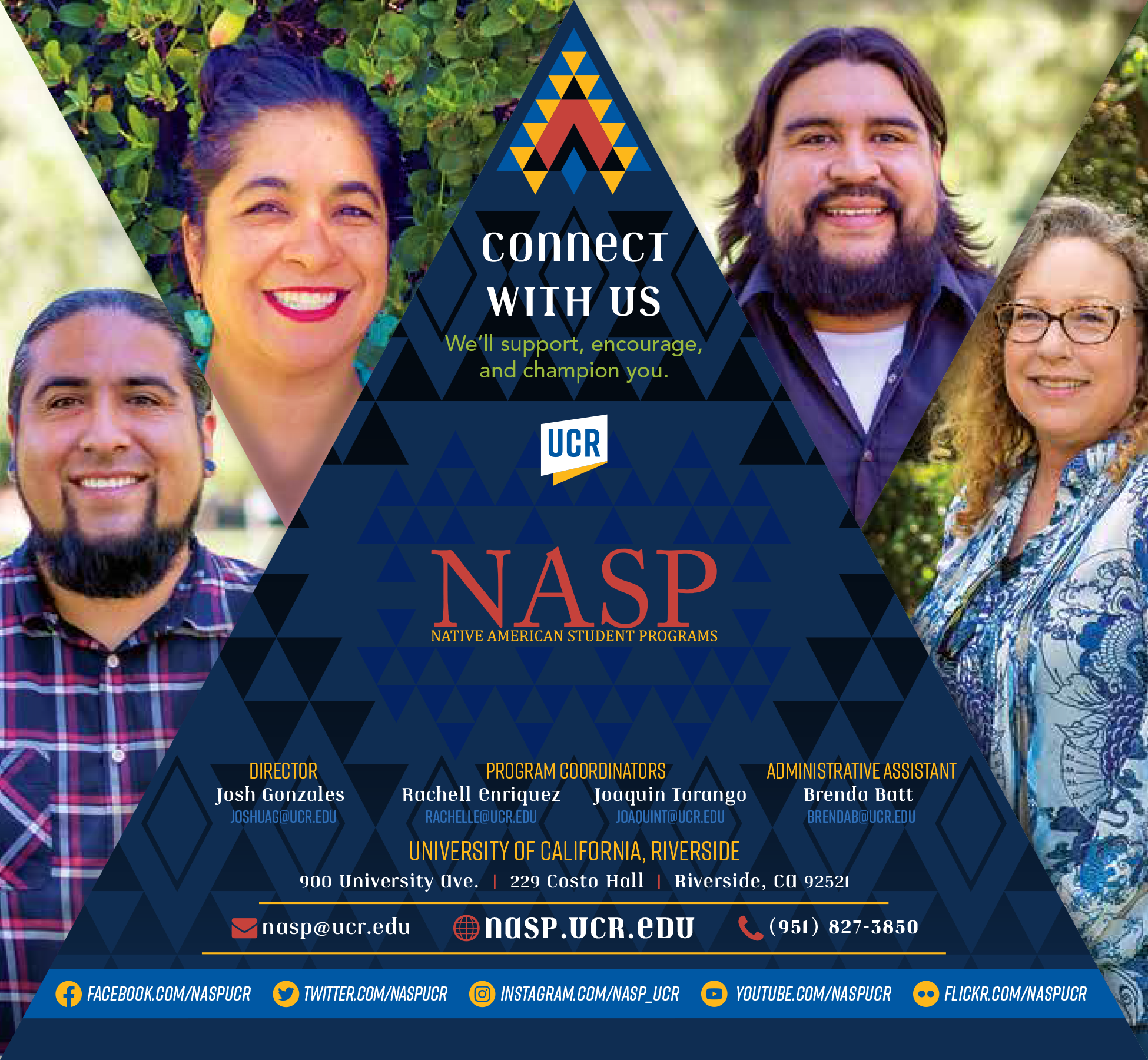